It’s the middle of summer and I have seven children in the house, the dog in a bedroom upstairs because he keeps barking at one of the children, and two rabbits in the laundry room because it is 97 degrees outside and bunnies, as you know, don’t like temps over 85 degrees. Also, one of the bunnies might be pregnant, but that’s not why she’s mean. She was mean before. That’s why she lived in a chicken coop. But now she lives at my house.

I’ve been working on a contemporary novel about a woman who runs an animal rescue and somehow real life and writer life are overlapping. How else to explain this? 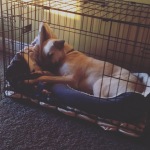 Some pigs strolled through my backyard. Seriously.

And, finally, why would I have a rooster show up in my garage?

These pictures all have stories and they may or not make it into my novel, but there are other parts of animal rescue. I had to research pit bull fighting. Here’s the book that was most affecting.

The Lost Dogs: Michael Vick’s Dogs and their Tale of Rescue and Redemption

What I read made me angry and horrified and sad and proud. Yes, PROUD. The animal control officers who were told not to accuse a sports celebrity, but did because it was the right thing to do. The men and women at rescues all over the United States who worked tirelessly to save the dogs: rehabilitating and teaching these abused animals how to be dogs again. Loving on them, training them, believing in them. Acting on Gandhi’s famous quote, “The greatness of a nation and its moral progress can be judged by the way its animals are treated.”

I salute those who, like my character, give their life to make this world a better place for animals. I had the opportunity to attend a fundraiser for Luna’s House, a rescue in Maryland, and get a glimpse into the amount of work that goes into running a rescue. 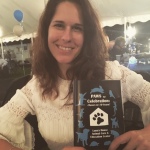 I need to hurry up and finish this draft because there’s a chapter where a zebra appears and I….I don’t think I have any more room in my house!

Hope you are enjoying your summer.