I took Gabe to the dog park on Thursday, December 22nd  to run off some excess energy. Within five minutes another dog attacked him. The other owners and I ran over. I pulled off the first dog, but behind me the rest of the dogs had piled onto Gabe. When my dog got up, his hind leg dragged behind. My daughter was with me. I carried him to the car and we rushed to our vet. The vet squeezed us in, shoehorning an exam and x-rays between all the other appointments right before the holiday.  The news wasn’t good: Gabe had puncture marks in his throat, in his shoulder, and a dislocated hip.

I sat, stunned, as my mind flashed through everything supposed to happen between December 23- Jan 3rd . We are hosting Christmas and New Year’s at our house. My niece Izzy from Germany is visiting. Between her and the twins we have three birthday celebrations. I’d already arranged a trip to Virginia with each day over-scheduled: ski trip for seven people, a visit to my mother-in-law, our annual New Year’s visit to our friends the Perrones, and we’d even bought tickets to tour Monticello. My wedding anniversary is January 2nd. And, perhaps the most important celebration for our family: on January 3rd my daughter will return to Hopkins for her 5-year post-chemo check-up.

The vet said that Gabe would need to go to the emergency animal hospital. That way the doctors wouldn’t be rushed through the surgery and then he’d stay overnight for observation. I looked at my watch. My daughter and I had already been there three hours.

“Can’t you do it here?” I asked. I’d seen the movies where you put the cloth around the joint, pulled, and that sucker popped back into place: easy-peasy. The vet sketched a picture for me and said things like “shallow socket” and “cutting off the femoral head” and “false joint.” So….NOT easy-peasy.

I nodded my head. “I get it.”  I called Izzy. She’d already stepped up to drive my oldest daughter to drivers ed and my son to basketball practice. Now she drove over to pick up Syl so the three of them could have dinner before she picked up the older kids, who were literally in opposite directions. I waited with Gabe.

The vet came back in. I knew she felt bad about his being attacked, but by now the office was closing down. She said, “I’m not making any promises, but I’ll try.”

My mouth dropped open. If it worked, her doing the procedure would save me a lot of money and a lot of time. And it would get Gabe back together that much more quickly because his dangling leg was…upsetting. To both of us.

I waited. The vet and the vet techs stayed late as they tried to fix my dog. I pulled up my feet to get out of the way of the mop. I moved from the exam room to the waiting room and back again. It was super quiet. I waited.

And then…the vet said, “It worked. His hip is back in the socket. We’re just waiting for him to wake up from the anesthesia.”

I hugged her. He was fixed! She explained, “I had a horrible experience with a certain company. They’ve been so frustrating…well, I just couldn’t be that company.”

Here’s Gabe. He’s taking his antibiotics and anti-inflammatory and pain medication. He’s moving around and learning how to navigate the stairs. Hint: going down is much easier than going up. I called the dog sitter to let her know about his situation and my niece will stay behind to take him to his follow-up and then join us in Virginia.

But, my friend Lyn always advises to look for the lesson in situations. What was I supposed to learn here? How wonderful animal lovers like vets and vet techs are? I already knew that. That emergencies happen even when you already have plans? I already knew that too.

I think the take-away is what I noticed yesterday, after Gave was tired of laying around. He got up and I hovered over him with my arms outstretched so he wouldn’t fall and his hip wouldn’t fall out of the socket. I worried about if he was going to fall down and how he was going to use the bathroom outside and whether his bed should be down in the family room so he could see what was going on or up in my room so he could be by himself. I berated myself for deciding to go to the dog park and for him getting hurt.

Gabe gave a quizzical look at the leg in the sling and then stood on three shaky legs, figuring it out. He didn’t think of himself as crippled or needing special treatment. In fact, he was very confused when I gave him a treat “for free.” Instead of taking it he went through the “sit, shake, down” sequence he is familiar with and today we walk-hopped two half-miles instead of two miles but that was because of the rain, not because he wasn’t willing.

Gabe’s simple acceptance gave him the freedom to move forward, to literally get up and hop around without embarrassment or blame or anger. He didn’t have an idea in his head of how he wanted to be; he wasn’t disappointed when he didn’t match that idea. Maybe that’s the letting go and surrendering to each moment AS IT IS that I need to learn.

I wish you a wonderful holiday, whatever you celebrate, and a season of light.

PS Just to make sure that we didn’t get too comfortable, our dishwasher broke today too. Did I mention we are hosting Christmas AND New Year’s here? Bring on the paper plates. 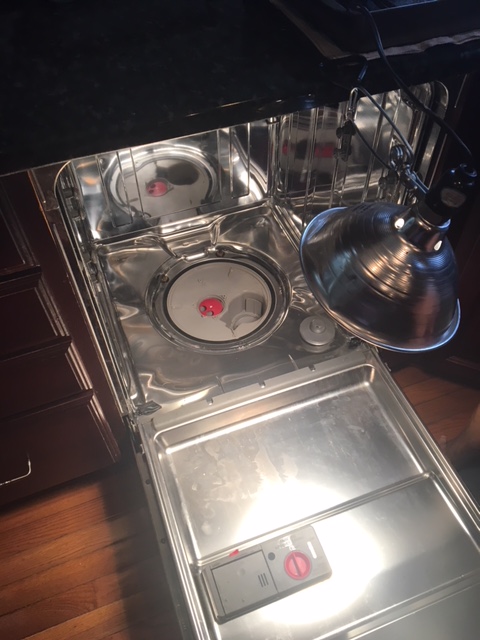