My daughter loves animals and is in the Animal Science Magnet Program at her high school. Which is all well and good except for these year-long projects that somehow involve the whole family. This year it was rabbits. I can truthfully say that I’ve learned more about rabbits than I ever planned to know. She submitted the paperwork and essay yesterday and carried the trifold poster out to the bus stop this morning. 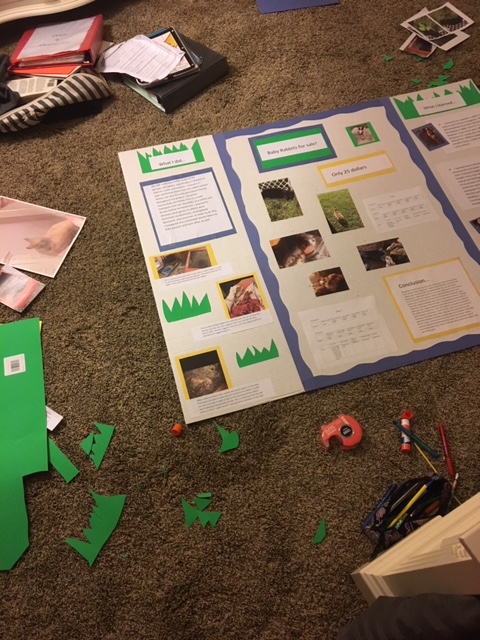 This year’s project had two parts.

1) The science experiment part. In this case she had an adult female rabbit named Storm produce a litter with Butterscotch and a litter with Opie and then compare the phenotype and guess at the genotype. <— See, I’m speaking science already.

2) There had to be an entrepreneur aspect. In this case, selling the offspring (to loving, committed homes with the understanding that babies would be returned to us if something didn’t work out).

She wouldn’t let me read her essay about what she learned this year, but we had some adventures. Remember this? Bunny Soap Opera

I learned a couple of things too.

The babies are three weeks old and three have already been reserved. Four more to go and then Storm will return to her owner and this chapter will be over…until my daughter needs to start next year’s project. AHHHHHHHHH!