Here’s my second of three book reviews of CHARM CITY SPEC authors AND hopefully a helpful guide for buying gifts for the readers in your life during the holiday season.

For something a little different, I selected two short story collections: SOONER OR LATER EVERYTHING FALLS INTO THE SEA and UNCOMMON MIRACLES. Short stories are nice for those who like to experience many different “worlds” and casts of characters, who want to answer one question or examine one moment in time rather than commit to a three-act structure, and for those who, practically, have less time to read. Convinced? If so, here are two collections that would make a wonderful gift this holiday season. 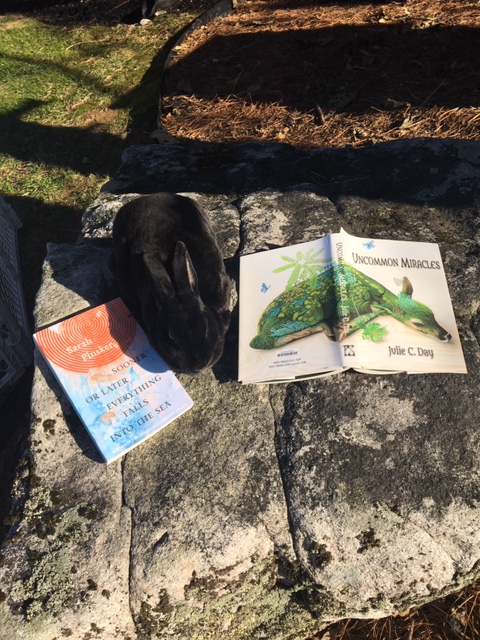 Storm sunning herself between books.

SOONER OR LATER EVERYTHING FALLS INTO THE SEA by Sarah Pinsker

*This beautiful, complex debut collection assembles some of Nebula winner Pinsker’s best stories into a twisting journey that is by turns wild, melancholic, and unsettling…The stories are enhanced by a diverse cast of LGBTQ and nonwhite characters. Pinsker’s captivating compendium reveals stories that are as delightful and surprising to pore through as they are introspective and elegiac.”

If that’s too oblique, here’s some specifics: In this debut collection, you will meet runaways, fiddle-playing astronauts, a touring band, under-employed Americans, retired time travelers, and dopplegangers.

Who would love it: Readers who like WINNERS… BECAUSE Sarah Pinkser’s stories have won the Nebula and Sturgeon awards, and have been finalists for the Hugo, the Locus, and the Eugie Foster Memorial Award.

“My grandmother was an engineer, part of our original crew. According to the tale, she stepped outside to do a visual inspection of an external panel that was giving anomalous readings. Along with her tools, she clipped her fiddle and bow to her suit’s belt. When she completed her task, she paused for a moment, tethered to our ship the size of a city, put her fiddle to the place where her helmet met her suit, and played ‘Wind Will Rove’ into the void. Not to be heard, of course; just to feel the song in her fingers.”

Final Thought: Pinsker’s first novel, Song for a New Day, also released recently so you should buy a copy of that too.

Premise: “Julie C. Day makes a bold debut with this genre-bending collection of stories. At times whimsical, at times heart-breaking, but always clear-eyed and honest, Uncommon Miracles proves that Day has joined the front ranks of the writers carrying American fantasy into a new golden age.”

Specifics: (18 stories) A grieving man travels through time via a car crash. A family of matriarchs collects recipes for the dead. A woman gains an unexpected child in the midst of a bunny apocalypse. An outcast finds work in a magical slaughterhouse. Whether set in a uniquely altered version of Florida’s Space Coast or a haunted island off the coast of Maine, each story in this collection carries its own brand of meticulous and captivating weirdness.

Who would love it: Readers who like stories that are more Alice in Wonderland than Hallmark movie.

Favorite character: Cole (from “Everyone Gets a Happy Ending”)

“Steph and I are stretched out on plastic recliners, our laps full of her offspring: six desert cottontails, and for some unknown reason, one of the English Spot variety. After all my careful care – changing the bedding in their crate, cradling them when Steph disappears from their sight – the English Spot is still the only bunny who greets me when I come near. I’ve named him Cole. A fact I don’t share with Steph, though I whisper it to him like a lullaby when she isn’t near.”